My work in this show is a celebration of the Bay Area's central transportation structures, the main arteries that are so vital in the transport of lifeblood between our communities. I take on a multitude of visual and conceptual vantage points, equating our local bridges and freeways to large musical instruments, sculptures, and abstract art, while at the same time trying to work out some of the social and environmental issues that lie beneath these structures.

Freeways are powerful tools for connecting people, but they can also set up walls between them. It is this darker underbelly of transportation structures that I also attempt to address in this show. For example, the brushstrokes of thick black paint running parallel to the roads suggest that the curving ramps are brushstrokes in their own right, works of art created by an artist engineer. But they are also suggestive of thick, black oil--the resource that keeps these structures in heavy use.

Artist Yutaka Sone claims the Los Angeles freeways are our version of the domes and towers of Europe. Architectural critic Reyner Banham was in agreement, regarding the bougainvillea-veiled intersection of the 10 and the 405 as one of the "greater works of man". Similarly, my work holds freeways as high art, and as evidence of great civic achievement, but it also recognizes that any work of man is flawed, has social repercussions, and is subject to the destructive forces of nature and time.

My hope is that viewers' previous notions of freeways will be challenged and expanded.  As they travel the Escher-esque web of elevated roads while approaching SFO, I hope they can view, with a child's sense of wonder, the maze of chaos from within that gives way to a graceful elegance from above, and marvel at these structures that connect, and sometimes divide, communities, ultimately only weakened by one master - time. 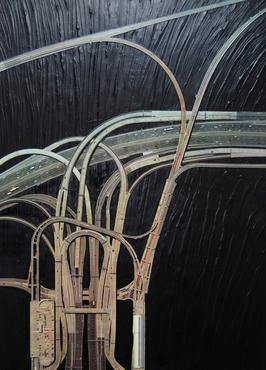