The process for my photographic weavings involves cutting, with scissors, one photograph horizontally and another photograph vertically and then weaving the two images together. There is no “pattern” to my weaving, rather, I weave depending on which elements of each image I want revealed or hidden.  I feel that this delicate method of interlacing images is much more intimate than the layered gluing of collage or the digital manipulation of a Photoshop composite.

My Engine Garden Series explores concepts of masculinity, femininity, and the animation of inanimate objects. In utilizing photography as my medium, a historically male-dominated medium, and employing it within the mode of weaving, a historically female-dominated craft, I am fusing together the worlds of fine art and craft allowing them to cohabitate the same tableau. As the “male” machine components and “female” flowers and leaves get physically and metaphorically woven together, a mating dance of imagery and gender unfolds before me. Gritty, black rubber tubes dive beneath delicate leaves; succulents bloom atop cold, engine blocks; electrical wires twist around slender stems. These once inert machines transform into dynamic, writhing, growing organisms seeming to evolve before our very eyes. From this marriage of engine and garden a frighteningly beautiful child is born: half machine, half plant, half insect, half alive, half dead.

The mirror-image effect in many of my weavings creates a creature-like symmetry which naturally gives rise to faces, eyes, arms, legs, and mouths. Through this effect, the engines become anthropomorphized, furthering the feeling that these machines are, in fact, alive.

I like to think of my weavings as little laboratories where I get to play with grafting stems onto metal tubing and splicing genes together to create hybridized creatures. In this way I serve not only as artist but also as scientist, engineer, and botanist—bringing my weavings into dialogue with the direction that science and technology is moving, towards the age of the “biological machine”.

Creating new life through the act of weaving is no new concept, it is a repeating theme replete through creation myths from around the world. Grandmother Spider Woman, in the lore of the American Southwest, weaves the entire world from the threads in her belly.  Plato had a vision of Ananke, goddess of necessity, weaving the universe using the sun, moon, and planets as her spindles.  As women, we are quite aware of the potential our bodies have for creating new life, and as artists, we are doubly aware of our potential to create something out of nothing.  When I weave, I feel connected to my inner potential for creation and feel a kinship with the goddesses who wove the universe.  Yet, due to the back-breaking nature of my weavings, I also feel connected to the women through history that have labored over their looms and the giant weaving machines of the industrial revolution, surrendering their creativity to become machines themselves. 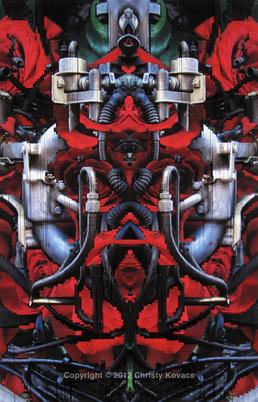